Scott Jackson Inducted into the CHF Hall of Fame 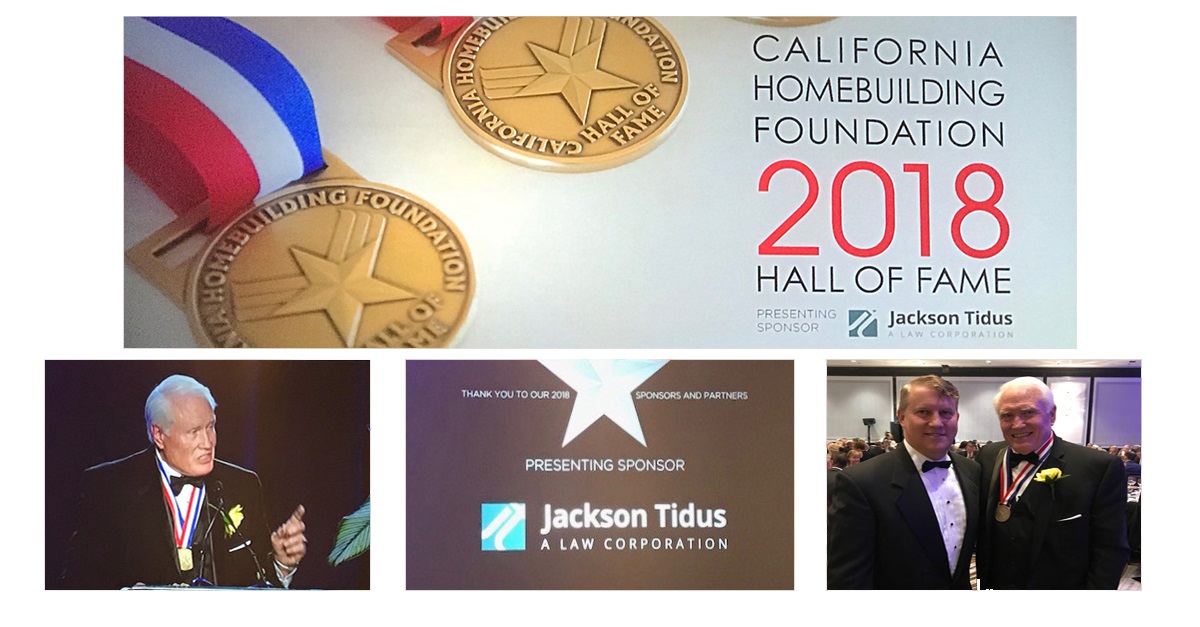 IRVINE, CA – Jackson Tidus is proud to announce that co-founder Scott Jackson was inducted into the California Homebuilding Foundation (CHF) Hall of Fame at the CHF Hall of Fame Gala in San Francisco on June 26, 2018.  This honor recognizes Scott’s decades-long contributions to the homebuilding industry, highlighting his exceptional legal career and charitable efforts.

Induction into the CHF Hall of Fame, a recent recognition by the California State Legislature and numerous philanthropic awards show that Scott has fulfilled the promise of leadership cultivated at the United States Air Force Academy and during his years of military service.

The CHF Hall of Fame

The CHF was founded in 1978 and invests in the future of the homebuilding industry.  Its work includes providing college and graduate scholarships, funding research on key public policy issues, compiling and publishing timely construction and new home statistics, and providing training seminars.

Scott is a founding member of Jackson Tidus, a top full-service law firm in California serving the real estate industry.  He has been named to the Southern California Super Lawyers List every year since 2002, as chosen by his peers.

Scott, a graduate of the United States Air Force Academy, has been guided by one of its core values – “Service Before Self.”  During his career, Scott has volunteered his time and legal expertise to numerous charitable, community and professional organizations, including the following:

Scott’s work for the Home(ful) Foundation, and its predecessor the Lennar Charitable Housing Foundation, provide an example of Scott’s unique legal approach.  He developed a legal framework that created a new source of funding for homeless services through home sale donations.  As a result, during the last 10 years, over $10 million has been donated to over 100 housing charities.

Scott has fostered a legacy of volunteering and community involvement at Jackson Tidus.  Whether legal, industry or community based, Jackson Tidus and its attorneys support over 100 nonprofit organizations through membership, board service and financial contributions.  This culture of giving was recognized in 2017 when Jackson Tidus was honored with a Spirit of Volunteerism Award as a result of donating 508 hours of legal services to Habitat for Humanity OC.

Scott and his wife of 51 years, Susan, live in Newport Beach.  They both love spending time with their son and daughter-in-law and can often be found at sporting and school events of their four grandchildren.

Scott was a co-captain of the United States Air Force Academy’s football team and had the honor of playing on some of the nation’s most hallowed grounds in sports, including Soldier Field in Chicago.  His love of sports now continues on a different type of grass, with weekly golf outings, highlighted by a trip to Scotland and several very special rounds of golf at Augusta National Golf Club.

Back to Media
PrevPreviousTougher Sales Tax Collection Road Ahead for Businesses Utilizing E-Commerce to sell Products and Services
NextMichele Staples and Nedda Mahrou to speak on Attainable Housing at California Land Use Law & Policy Conference March 18, 2019 in Los AngelesNext